Player mascots from England, Germany, Italy and Spain are being given the opportunity to meet some of the world's greatest footballers virtually during the UEFA Champions League final tournament. Two youngsters got to interact with the likes of Kylian Mbappé and Ángel Di María before Tuesday's semi-final between Leipzig and Paris Saint-Germain, and another virtual meeting will take place in the lead-up to Sunday's final.

The initiative has been set up by UEFA Champions League partner Mastercard in conjunction with the UEFA Foundation for Children, which has selected the children who have been appearing virtually at the Estádio do Sport Lisboa e Benfica in Lisbon.

That unique opportunity was enjoyed by Ruby Wilson and Annika Wein ahead of the last-four contest between Leipzig and Paris, with both youngsters given the chance to welcome and interact with the players as they entered the stadium. Ruby, a football-mad ten-year-old from Sunderland in the northeast of England, is currently undergoing chemotherapy, while 11-year-old Annika Wein is receiving treatment at a cancer clinic in Frankfurt.

"Wow! I will remember this day for the rest of my life! Thank you!" said Ruby upon learning she had been chosen to take part in the activation. "After the doctor only recently told me that I might not play football ever again, this lifted my spirits so much! I will never forget this day." 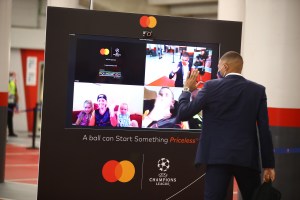 UEFA President Aleksander Čeferin, who is also the chairman of the board of the UEFA Foundation for Children also passed by and interacted with Annika and Ruby.

The two children were chosen by the UEFA Foundation from projects being undertaken in Europe in conjunction with other organisations. Ruby is a member of the Newcastle United Foundation, which offers support to children living with disabilities, while Annika is at the Klinik für Kinder- und Jugendmedizin, part of the Universitätsklinikum in Frankfurt.

Nicoló from Italy, who devours Panini stickers and sports newspapers with relish, will have the chance to meet the players before the final. He is suffering from severe cognitive impairment and was chosen by the Play for Change initiative, which is based in Milan. He will be joined by Amir who is currently at the Vall d’Hebron hospital in Barcelona, which is being supported by the Eric Abidal Foundation – an organisation which helps children who are living with cancer.

"The UEFA Foundation is delighted to support such a wonderful initiative," said the UEFA Foundation's general secretary, Urs Kluser. "Children in hospital rarely get the chance to be involved in anything like this – it was wonderful to see their huge smiles and happy faces as they welcomed the players to the stadium."

"Thank you to our partners for making this possible – the Newcastle United Foundation and the Klinik für Kinder- und Jugendmedizin, Universitätsklinikum Frankfurt. Finally, a big thank you to key sponsor Mastercard for supporting the UEFA Champions League for over 25 years. Together, we helped make this once-in-a-lifetime experience a reality for Ruby and Annika."

Mastercard has been a committed partner of the UEFA Champions League for more than a quarter of a century, while its player mascot programme has given children from around the globe priceless memories over the years. However, given the challenges posed by the COVID-19 pandemic, it was forced to come up with a new plan for this year's competition.

"Since the beginning of the pandemic, we have focused on people and thus needed to pivot quickly from physical to digital experiences, to reflect the changing environments we are living in," said Jeannette Liendo, senior vice-president, marketing and communications, Mastercard Europe.

"For the first time ever, at this year’s semi-final our player mascots Ruby and Annika had the chance to interact live with the Paris Saint Germain and RB Leipzig players as they arrived at the stadium. For the UEFA Champions League final, Nicoló and Amir will also enjoy a once in a lifetime experience as they virtually welcome the players from Bayern Munich and Paris Saint Germain. As we strive to push the limits as a tech innovator, we hope this will create a truly memorable experience for our mascots to celebrate the return of the UEFA Champions League. We are very proud that 2020 will see our first ever digital activation for the player mascots." 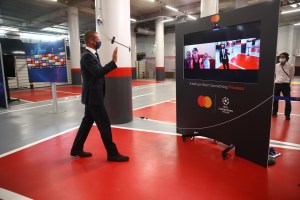 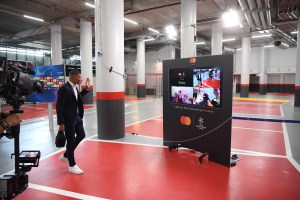