Khalida Popal, a former member of the Afghanistan national women’s team, shares the story of how she fled her home country, experienced the healing power of football, and is now using the beautiful game with FC Nordsjælland to empower young people from different backgrounds through the Football for Unity project.

I grew up with the passion for football

I started playing street football with my brothers when I was a child. I grew up in a warzone in Afghanistan, then when I was nine years old I became a refugee. Until I was a teenager, I lived in a refugee centre in Pakistan, because of the war, and the only thing that could motivate me – keep me together – was sport, especially football.

When I returned to Afghanistan, even though I was already a grown-up, I still acted more like a teenager, and still played football with my brothers on the street, because football is the most popular game in my country.

At that time, people tried to stop me playing football. I was a grown-up woman and so they tried to separate me from my team because it was a boys’ team and, at that time, we didn’t have a girls’ team. People were telling me that I belonged in the kitchen, I belonged at home, and I existed to serve a man and make a man happy. Every time they said ‘no’ to me playing football, I said that I would prove to them that I could do it. Every time I played football, the minute that the ball started rolling, I began to feel happy and disconnected from all the challenges I had faced as a refugee, as a child, or the problems women face in society.

When I was no longer allowed to play football on the street with my brothers, I was determined not to give up, but bring the passion and love that I felt to all the women and the girls my age, so they could also experience it.

Then, at school I started a campaign that spread to different schools, and then went all the way to creating a kind of school league. That’s how we started getting more involvement from the federation, and pushing the federation to recognise our league and establish the first national women’s football team in Afghanistan.

Every time I was pushed down, I got back up and said: “I’m not giving up”, and I was sure I could do it and could do it better. That drove me to set up Afghanistan’s first national women’s team, develop women’s grassroots football in the country, be the very first woman to work at the Afghanistan Football Federation, becoming its first female director and its youngest board member.

Football actually taught me a certain type of activism: how I could use the game as a way to own my narrative but also to help other women in my country to own theirs. That’s how the I started out as an activist, thanks to football, and I’m grateful to the sport that helped me to do it naturally. My activism put me in great danger in my country, so I had to leave. It was not only because of the most religious or extremist people, but also those who were simply afraid of losing power to women. That was a lot of pressure, and I wanted to make a bigger impact and a bigger change, so I chose to leave.

The challenges of being a refugee

When I made it to Norway, my experience of refugee life was different, because I was now grown-up. The first time, I had been a child and I didn’t feel it that deeply. Living in a refugee centre in Norway, I felt so much pressure on women, the lack of social activities, the lack of interest in women and girls. Then I moved to Denmark, and there I again lived in a centre. At that time, I was suffering from depression and trauma. It’s tough living in a refugee centre, leaving your family and everything behind you. It was a tough decision to make. No matter how strong I was at that time, I felt broken, and I cried night and day. Then I witnessed so many refugee women going through depression and stress, and some of them even tried to end their lives. It was so sad. I told myself, ‘I don’t want to sit here and cry’. No matter what happens to me, I don’t want to give up on my mission to empower women and girls. I want to use sport to unite people, women in particular, and help them to be powerful and strong so that they can get through their difficult situation.

I remember feeling that life in a refugee centre was like having no identity – you’re no one. You’re not a member of society, even if you’re in a very well-developed country. You’re just no one. You don’t have anything and there aren’t so many activities to keep you busy. There are a lot of restrictions and you have an uncertain future: You don’t know what is waiting for you. Living in a refugee centre, it felt like I was like a doll hanging in the air: I couldn’t land on my feet, I couldn’t fly in the sky; I was just left hanging, and I didn’t know what to do.

Then I said to myself, ‘I have to pull myself together and also help others.’ So, once again I have to use the power of sport that helped me get through tough situations in my country. So, I started getting women and girls living in the same centre involved. I knocked on doors and said, ‘Come on outside, we’re going for a run, then we’ll play some football and then we’ll do some dancing.’

I created my own organisation "Girl Power"

Once I got permission to stay in Denmark – I was still in the refugee centre but I was playing in a football club – I decided to set up my own organisation, Girl Power, whose main focus is empowering women – refugees, immigrants or ethnic minorities – to gain an informal education. Girl Power is more about empowering and supporting girls and women, and building bridges between the local population and the refugee community, in an organisation where like-minded people meet up, share their stories and experiences, and network. Girl Power organises sports activities in the refugee centres, where the young leaders, all women from a variety of cultural backgrounds, coach the refugees, and then we offer them education, or leadership academies.

Then I started working with FC Nordsjælland, club with women's and men's football, where my main responsibility is community projects and women's football. I’m very proud and happy this year to be working with streetfootballworld and the UEFA Foundation for Children through the Football for Unity project that supports this vision and mission, by connecting the various stakeholders and different organisations, in one joint project. That is the power of football – bringing unity.

I’m thrilled to be leading a project that focuses on youth empowerment. It involves young people who we call ‘community champions’, from all sorts of cultural backgrounds. We have Danes and people from different ethnic minorities, boys and girls together. And it’s done through a leadership programme made up of various educational workshops that are like youth discussion forums. We talk about inclusion, integration, the effect of sport on young people's lives, and also the impact of sport and unity on society. It's fantastic, and football is all part of those activities.

We need to bring people together to support each other, because it’s not refugees that are the problem. If I’m living in Denmark with refugee status right now, it was not by choice. I didn't just say: ‘Let's go and have some fun being a refugee.’ Nobody wants to leave their country, their dreams, their family, their heritage and everything they belong to. But there are situations that force people to become refugees. It's not the refugees' problem – it's the world's problem. And it's our collective responsibility to take care of each other, because there are refugees from wars, but also refugees from environmental crises. And there will be many, many more.

So, how can we have a socially responsible world where everyone is nice to each other, we take care of each other and everybody supports each other?

Like in football. When you walk onto the pitch, it doesn't matter how rich or poor you are, how white or how black you are, or how brown you are, you play the same game. All that matters are the team and the goals. That's why football is a good lesson for everybody all around the world. You just need to think about the pitch, the team and the purpose, to just have a wonderful world together, where people accept each other, respect each other, and are role models to each other too.

That's how we do it in the Football for Unity project. The best thing is that it’s not a refugee project; it’s a unity project involving not only people currently living in refugee centres, but also second-generation immigrants, born and raised in Denmark, and youngsters whose both parents are Danish. So, it’s like a common ground where they all come together under one umbrella. I really love the idea of not just focusing on one group, but adopting more of a ‘let’s do something together; let’s bring people from different backgrounds together’ approach. The main aim is, of course, to support and empower young people. One of the challenges in Danish society is that refugees get a lot of negative press, such as: ‘Refugees are coming to take our social benefits. They take our money. They take our jobs.’ But this sort of project helps to connect people by sharing their stories: ‘Why am I here? Why am I in Denmark? I’m a refugee and what is that like?’

That’s part of why I give back. When I run this project and also, for example, lead some of the workshops, refugees and non-refugees see me as a role model. The refugees see me and say, ‘Oh, she can do that, so I could do it too.’ Then non-refugees see me and say, ‘She’s not living here for free; she’s not coming here to take our money; she’s actually giving back to society. She needed protection, but she’s also earning a living and paying tax. So she’s contributing to society.’I think it’s very important for the next generation to have role models to empower youngsters from all cultural backgrounds, so they can say, ‘Okay, I can do this. I can be part of it.’ And it will also help change the mindset in society to one of, ‘Yes, refugees come, but they’re not here for the money; they also contribute to society. Their lives were in danger, or there were facing certain social or political problems.’ So, that’s why we need a lot of role models in Europe, especially.

My wish for this EURO

If the pandemic has taught everybody a lesson, it is how difficult it is to be isolated, miss our loved ones, not have access to the things we want, be deprived of the freedom we want. So, I really hope that during this UEFA EURO 2020, people will feel more respect, acceptance, and just enjoy the unity and inclusion and fun of the game.

Football for Unity is a project co-funded by the European Union’s Asylum, Migration and Integration Fund. For more information, please click here. 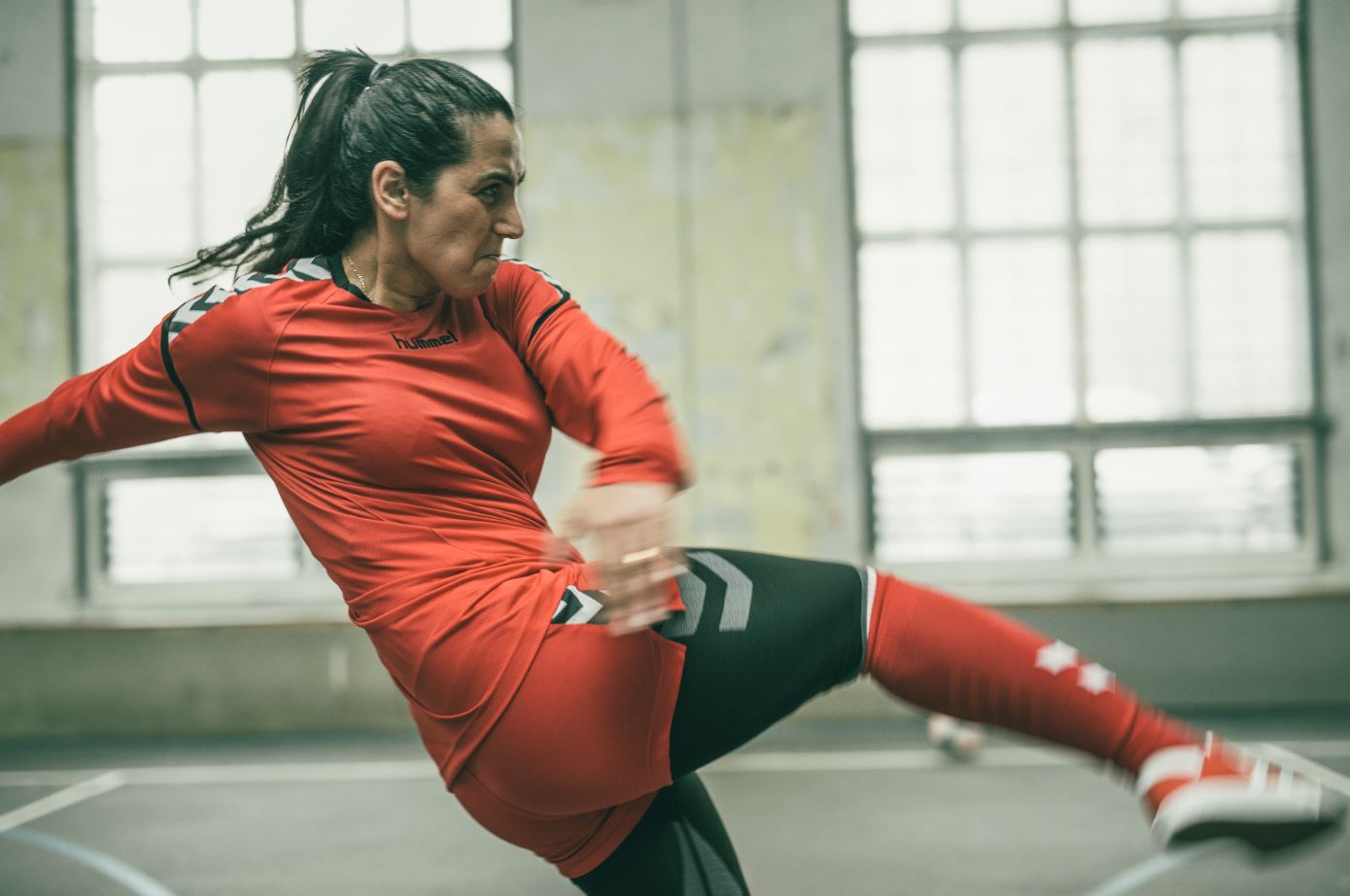 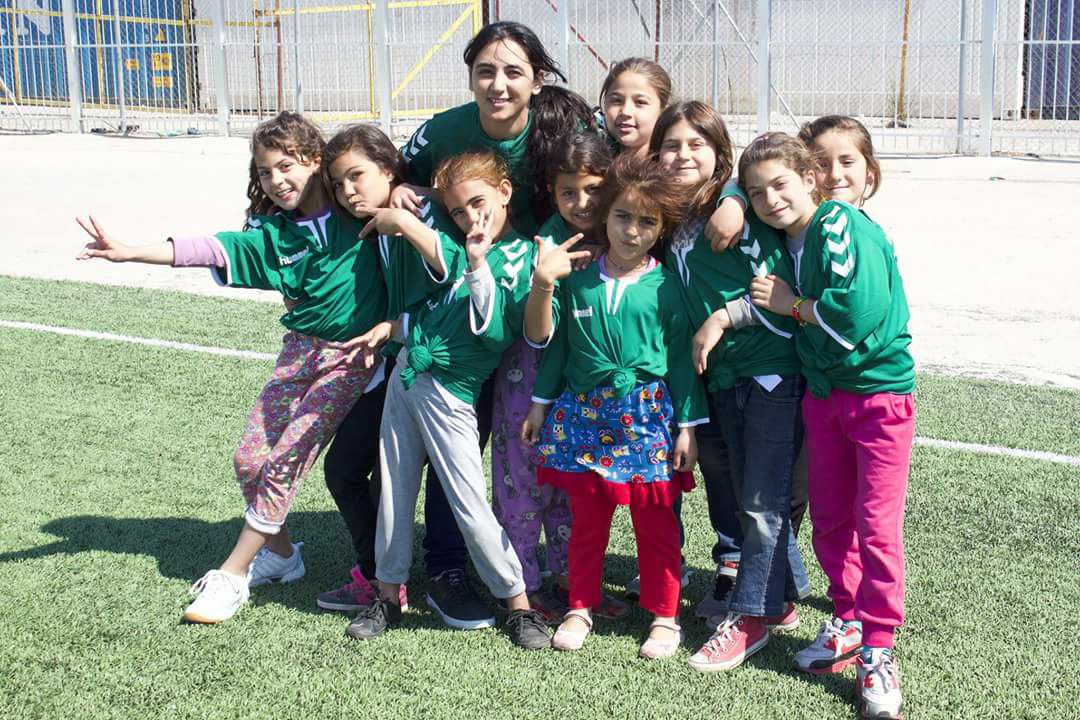 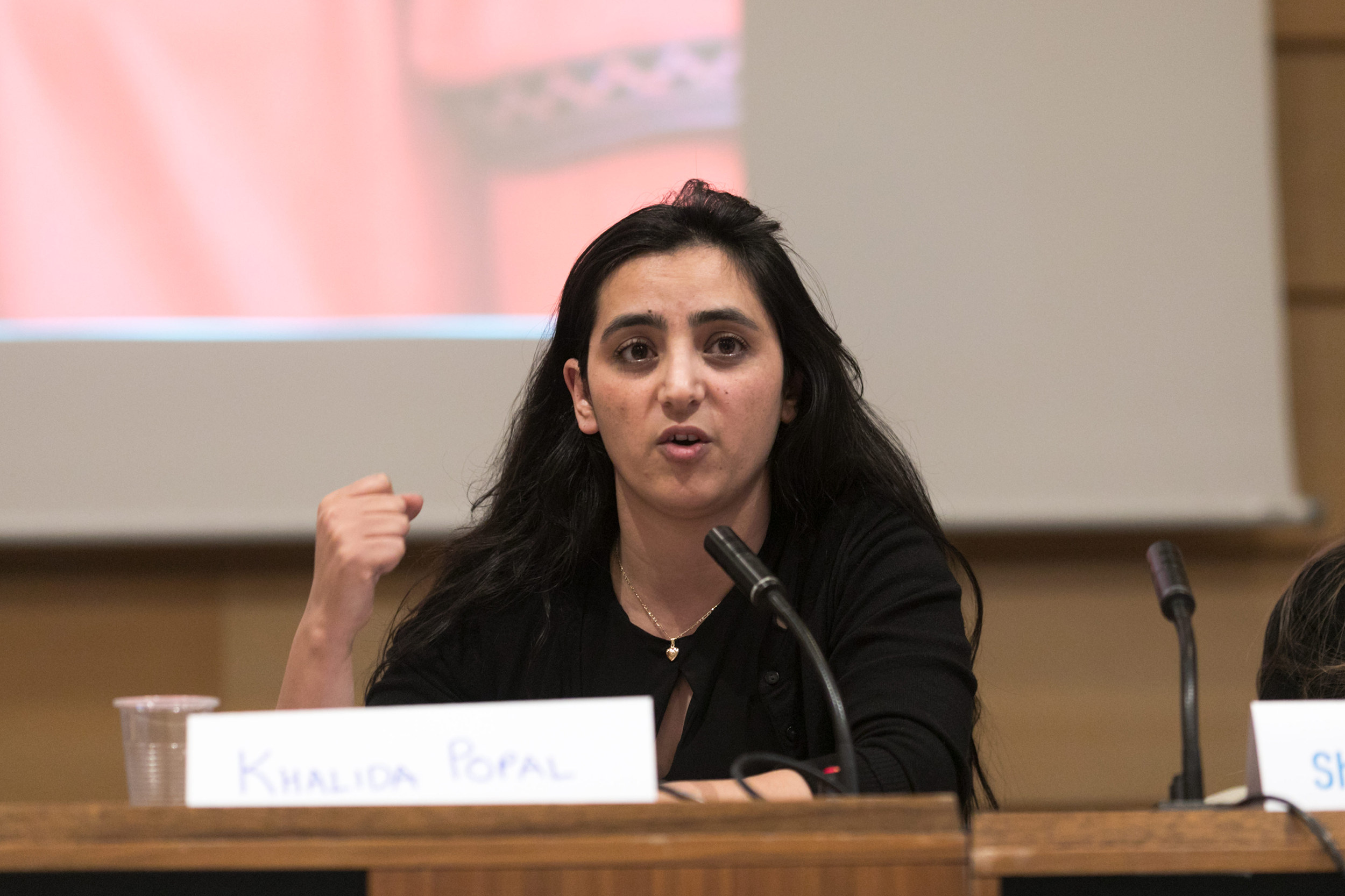 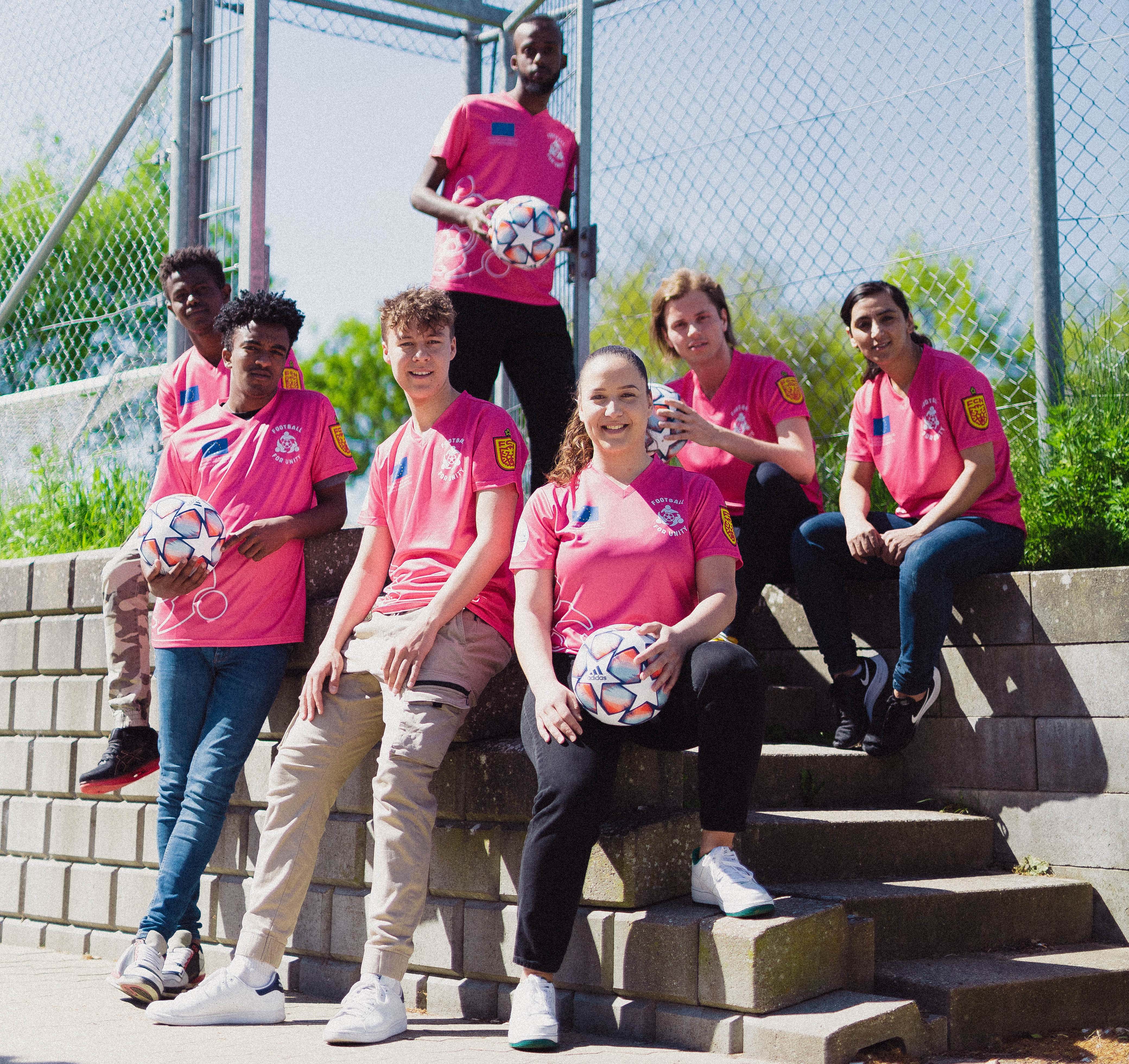