Emergency aid to refugees at the Belarusian-Polish border

Emergency aid to refugees at the Belarusian-Polish border

The situation on the Belarus-Polish border is a humanitarian disaster. These desperate people have lost everything and are being held hostage for reasons beyond their control. These people are being instrumentalised, mere political pawns, but they nevertheless and above all remain men, women and children. Some of them have already died in almost complete indifference, and the others are still in immense distress and struggling to survive. 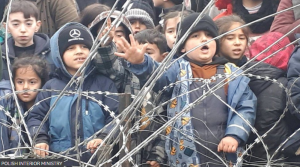